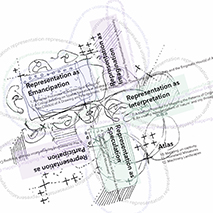 Representation is a broad umbrella that covers different disciplines such as design, the arts, architecture, cinema, literature, politics, economics, semiotics, etc… We may even say that representation is in every act of human beings whenever they think about something.

Hans-Georg Gadamer points out that “representation does not imply that something merely stands in for something else as if it were a replacement or substitute that enjoys a less authentic, more indirect kind of existence. On the contrary, what is represented is itself present in the only way available to it.1” In this respect, representation can be the subject of research. Here two conceptions may occur: representation of the world and the world of representation. The former proposes the origins of representation for the agenda, such as the ways of representing the world during the Medieval, Renaissance, Baroque, Modern or contemporary periods. The latter highlights the ontology of representation and its emancipatory, participatory, imaginative, speculative, predictive, and interpretive characters.

“The tension between the productive and the creative reality of architecture may be better understood if we examine more closely the nature and role of representation. In a conventional understanding, representation appears to be a secondary and derivative issue, associated closely with the role of the representational arts. However, a more careful consideration reveals, very often to our surprise, how critical and universal the problem of representation really is. What we normally refer to as reality, believing that it is something fixed and absolute, is always a result of our ability to experience, visualize, and articulate—in other words, to represent so as to participate in the world. Countering representation’s participatory function is its tendency toward emancipation and autonomy.