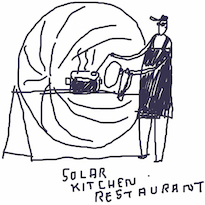 In June 2021, LaPlasita organized a conference titled “Ciudades Alimentadas” (Fed Cities) Seville. My presentation there consisted of proposing three hypotheses for designing a city using a diet as an agent of urban and social planning.

The title: Food as a City Masterplan

The three diets were analyzed and referenced against my Food Design projects, and ultimately, I presented a scenario that described how these systems could alter the city on both an urban and social level.

Of the three diets described, I was personally most drawn to the third – which proposed that through the elimination of agriculture the city would become a platform for relationships and events, with food, the edible object, liberated from the act of cooking and from the traditional accoutrements of eating: dining rooms, food storage, all the usual necessities. This proposal was the most speculative I presented.

The second proposal was the most realistic and consisted of uniting organic farming with the new collaborative economy systems managed by DAO, blockchain and tokens. This created a visualization of how large-scale organic gardens might be managed.

This text, written after the fact, aims to provide an overview of all three proposals with a particular practical focus on the second, that of growing crops on the urban periphery, which I call "Extrarradio Jumbo Gardening"